It has been over a month since I said what hopefully will be a temporary goodbye to my Partners Asia friends in Yangon. I got to travel with them, attend meetings with them, brainstorm with them and most importantly, learn from them.

Even though I have been to Burma eight times, I must admit, during my most recent month’s stay and in this past reflective month since returning home, I still find myself constantly saying, sometimes to others, but mostly to myself “na mah le boo,” the Burmese equivalent of “I don’t understand.”

And, I don’t understand, that indomitable and socially unique Burmese Spirit.

Truthfully, I will never be able to fully understand, but by gosh of all things, mathematics; it is helping me to at least describe what I saw. You might be bewilderly inquiring, “mathematics?” Yes, according to Wikipedia, the people’s dictionary, mathematics is the study of such topics as quantity, structure, space and change.

In the past, things didn’t add up in Burma. Natural resources were subtracted, people were divided, and the country’s problems multiplied. Realistically, the old math is not gone, but Burma’s future is transitioning upon a new math. 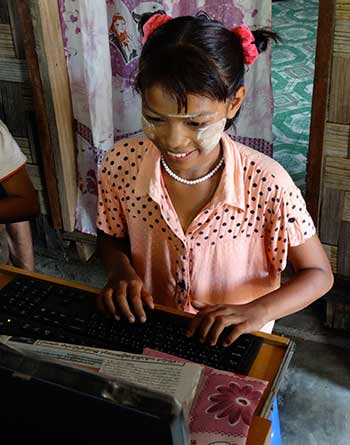 As part of my month’s stay in Burma, I had the fortunate opportunity to travel with some of the Partners Asia Team to attend a monastic education workshop in Mandalay. While meeting with some monks, I asked them what they wanted the peoples of the United States to know about their country.

One monk replied that Burma is a very resource rich country. I responded by saying, resources are wonderful, but their extraction, if not invested in the people, has a depletive consequence. Upon follow-up discussion, the monks began to talk about how they, as well as all the peoples in Burma, are a resource. They are a resource that is mathematically, an exponentially additive process. Even at the grassroots level, one person can share their knowledge with two people. Two people can then share that knowledge with four people. Soon eight becomes 16, 16 becomes 32, and so on. Eventually, the quantity of knowledge, initially conveyed by just one person, can have exponential consequences.

While in Yangon, I attended numerous meetings the Partners Asia Team independently coordinated regarding eventual self funding and budgetary matters, resource support for libraries, educational matters for a school for the blind, legal support for citizens whose land was taken, reviewing program proposals, etc. The Team is not waiting for Zunetta or Therese to be present. They are making these arrangements on their own. That is Partners Asia’s philosophy.

And it is their efforts that are contributing to Burma’s new math by the structural development of a social fabric leading to a citizen generated civil society. Partners Asia knows that a reformist social fabric can only be successfully woven into Burmese society if there is a collective Burmese resolve willing to transcend such divisive issues as gender, ethnicity, religion, sexuality, class and age.

Depending upon the situation, this social fabric structure can be a reactive safety net and/or a proactive springboard.

The need for a safety net and springboard is particularly relevant to Partners Asia’s involvement in the increasing problem of land grabs. Once again, this situation is ripe for Burma’s new math. Space is not only a measurement of a distance of separation, but also of geographical area. In Burma, space is about ‘rule of law’.

Partners Asia is working as a safety net to help families whose geographical land has been taken. This support may include, amongst others, women’s rights issues and vocational training.

Partners Asia is also working proactively to narrow the gap so Burmese citizens have more of a structural and functional access to their Constitution in terms of land registration and entitlement.

And finally, the fourth aspect, of this new Burmese math, is change. This change is the consequence of uniting quantity, structure and space. In this new citizen driven, Partners Asia supported Burmese math, one plus one plus one equals a changed sum much greater than three. It is an expanding, grass roots investment computation altering Burma’s future.

Just as Wikipedia, the people’s dictionary is part of Burma’s new math, so to may there one day be an entry in Wikipedia describing Burma as a people’s democracy. The citizens of Burma must be allowed to determine the characteristics of that democracy. After all, it is their country.