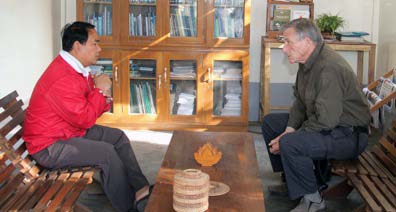 A local leader in conversation with Hal (right)

My recent adventure into Burma took me and my photographer buddy to a place we had not yet seen in country. We spent a short two days in Myitkina, a town near the center of the Kachin State.

Myitkina has big, unhurried and uncrowded streets and quite pleasant weather, at least when we were there. It borders the Irrawaddy River as it flows south into central Burma and then to the far delta. The mountains surrounding the town appear lush with jungle vegetation. The shops, sidewalk cafes, hotels and commerce appear much the same as any other medium sized town in Burma. At this cursory level, Myitkina and the surrounding area appears idyllic and we first wondered why there were not more foreign tourists here – there were virtually no Westerners, only an occasional aid worker.

Our mission there was to meet with the local branch of a national NGO that is one of our advisors, the Metta Foundation, and assess where aid was needed and being delivered to local communities. After only a few hours in the car with our local Kachin guide it became clear that this seemingly idyllic area of Burma was, under the surface, very troubled.

We learned in our short time there that there are three major sectors of development occurring in the area that some would call economic progress and many more would label economic and environmental devastation.

One is a major dam project on the Irrawaddy River. A few years ago construction on the project was halted by the new government – halted but not declared dead. If completed, this dam would be the only one on the Irrawaddy, which stretches the entire length of the country and is a national symbol. A Chinese construction company made some agreement with the previous military government to build the dam and sell the electricity generated by it. It is not clear how much of the electricity will go to China and how much, if any, to Burma. A major source of hardship to the local population was the resettlement of villages that would be flooded by the new dam. These villagers are now in a state of limbo – not knowing if they will ever go back to their traditional villages and livelihood. Once entirely self-sufficient, they lack many of the basic necessities such as basic health care and schools.

Another is mining, again done by Chinese companies. Gold panning on the river bed and mining has been done for some time and is extremely harmful to the environment and the health of the local people. The mining process involves the use of mercury to leach gold from the ore. The mercury remains in the rivers after the miners have left, killing the fish and making the water undrinkable. The local Kachin, except probably for a very few, have not benefited by mining at all.

Logging is also performed by clear-cutting here. I don’t have to spell out the devastating environmental impacts.

There are other serious underlying problems in the area, but if these three activities were being done in a way that protected the environment and provided some economic opportunities for the Kachins, many of those problems would dissolve or diminish.

In spite of these daunting developments, Partners Asia is providing some assistance to the Kachin in the area and will hopefully be able to support viable alternatives to the way business is being done in this beautiful part of Burma. We are working with local groups assisting farmers to register their land ahead of it being sold to companies. We work with lawyers to defend innocent victims of the war, including the father of a girl who was shot and killed by a Burmese soldier in 2013. When the father made a complaint to the Myanmar Human Rights Commission, he was charged with defaming the army. In a recent ruling, he was fined but not sent to jail.

With the generous support of our donors, we were able to help rebuild the classrooms for 1,377 children who have been living in camps since fighting resumed in the area in 2012. These schools receive international assistance, but not enough for the classrooms themselves. Another grantee has an innovative plan to make pig feed from corn husks. Both pigs and corn are very common in this part of Myanmar, but most feed is bought in from China. The social enterprise will employ six local people, and the profits raised will be used to support scholarships for young people, and care for the elderly. The pilot scheme has been very successful and we are looking for ways to support this venture, so that it can become a model for other partners in Myanmar.