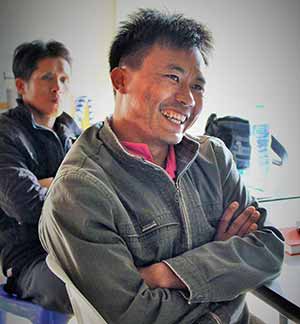 Khun Anastasio Nay Zar has been fighting an uphill battle his whole life. Four of his older brothers died during the civil war in the late ‘80s, and his family, despite decades of hard work farming, has remained in poverty in Southern Shan State. He loved school, but his parents couldn’t afford for him to continue into high school – even after selling off many possessions. His help was needed on the farm.

This determined young man was not ready to give up, and at age 18 decided to find ways to lead his community towards a better future. He became a youth leader in his village, and for the next three years, he taught leadership skills, Kayan literacy, religion, health and government to over 80 local youth in his spare time.

His hard work was rewarded when he was able to attend Ban Nai Soi Community Learning Center in Thailand. During his studies, Nay Zar founded Kayan Community Development Services (KCDS). They began with a community analysis and four Kayan literacy trainings, and have slowly but surely built an impressive network of education and cultural preservation.

Now, at 25 years old, Nay Zar is leading an organization which is working in Myanmar and Thailand, stoking the desires of his Kayan people to learn and to improve their communities.

“The KCDS team is trying to open the door to the world for their Kayan people.”

The Struggle for an Identity

The Kayan people, an ethnic minority estimated at around 130,000 spread throughout eastern Myanmar and western Thailand, have been ripped apart from decades of conflict. Many live in refugee camps or as displaced persons in small villages, often without basic necessities such as electricity, hospitals and proper roads.

Often, these ethnic communities are working and living across the borders of Thailand and Myanmar. Given that many do not have legal documents, they risk fines and imprisonment as they cross borders. Recently, a week-long training had to be shortened because KCDS staff was caught by Thai police and imprisoned for three days. Undaunted, they eventually negotiated their release and proceeded immediately to the training site to hold a condensed, four-day version.

“I learned [to write] Kayan that I didn’t know before. When I learned new words, I felt very good.” – David, Kayan Literacy Student

Kayan children face extreme hardship in their pursuit of education. Beyond issues with poverty and food scarcity, the current system often does not reach them, and they still face overwhelming obstacles once they gain access.

The greatest challenge is the failure of the government education system to accommodate children who don’t speak Burmese. The Kayan, like most ethnic minority groups, grow up speaking their native language, and are thrust into primary schools taught in Burmese. Without support or assistance, they fail and drop out in their early years.

In order to bridge these gaps and make education accessible for these students, bilingual schools and more accommodating language programs are needed. In Myanmar, KCDS has successfully used a peer-to-peer approach; training community members in Kayan and helping them build skills and knowledge to implement trainings in their respective villages. Currently, they have over 50 villages holding Kayan Literacy trainings every year.

Adopting the classical Latin alphabet, Kayan spoken language is also being transcribed for preservation. Beyond Kayan, they are also helping children learn English and Burmese, so Kayan children can be prepared to take full advantage of opportunities for their futures.

“It is important to know about Kayan literacy, but we also need to take time to learn about other languages and cultures. If we know our literacy, it is valuable; we can share it with other people and begin to have more free relationships and understanding of each other.” – Like Yu, KCDS Intern

With support from The John P. Hussman Foundation and Partners Asia, Nay Zar’s small but passionate and steadily growing team of young women and men are helping their community increase not only access to education, health, and income generation opportunities, but to sustain them over time.

Nay Zar isn’t finished, though! He plans to return home to Myanmar full-time and open a leadership school to continue impacting the lives of his people.

As Myanmar continues to open up, ethnic minorities are at risk of being further marginalized. While international aid is flowing into the large cities, these extremely poor, conflict-ridden areas along the borders are largely ignored. Partners Asia’s support is extremely important; we’re bridging worlds to provide opportunities for passionate leaders and their communities.

In an effort to better understand the issues surrounding education and ethnic languages, The Asia Foundation recently published an extensive report, Schooling and Conflict: Ethnic Education and Mother Tongue-based Teaching. As the report illustrates, this problem is not isolated to a single ethnic group; it is widespread throughout contested areas of Myanmar, Thailand, and China, as migrant populations flow across borders to escape conflicts and poverty.

Providing children with educational “on-ramps” in their mother tongue is a key piece to building an inclusive system that provides fair opportunities to all. Partners Asia is dedicated to helping support the efforts of local and often isolated communities in hopes that no one is left behind.