Our Partner Children on the Edge has worked in the refugee camps and slum areas in Cox’s Bazar for the last eight years. Last fall they delivered humanitarian relief, using trusted networks and deep knowledge of the camps. This took the form of 34 deep tube wells, 200 deep latrines, 5,840 food parcels and 5,250 solar lights. This year we’re supporting their efforts to build and operate 75 Learning Centers — providing education in a safe space for 7,500 children. 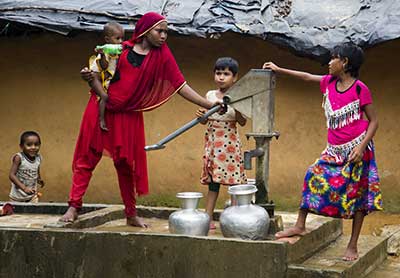 Focusing on areas with limited access to water points, Children on the Edge and local partner Mukti constructed 34 wells to a depth of approximately 700 feet each and 200 latrines. Within a few weeks of construction, they were receiving feedback that the wells provided the clearest water in the area, with families from other sections of the camp walking over half an hour to use them. Five months on, these facilities are all working perfectly.

Around 100 families use each of the 34 wells, making an approximate reach of 23,800 individuals. The 200 latrine blocks currently serve an estimated 35,000 people.

The Kutupalong-Balukhali camp is vast and remains mostly unlit. This heightens risks for everyone, but especially for girls and women who have often reported feeling unsafe going out after dark.

Children on the Edge sourced 5,250 portable, durable solar lights to be distributed throughout the camp. As the government identified the tackling of deforestation as one of their highest priorities, providing gas stoves and training became part of the process of obtaining permission to provide education in the camp. Consequently, 3,500 people have benefitted from stoves delivered to 500 households and the new Learning Centers are being used as a base for gas stove training. 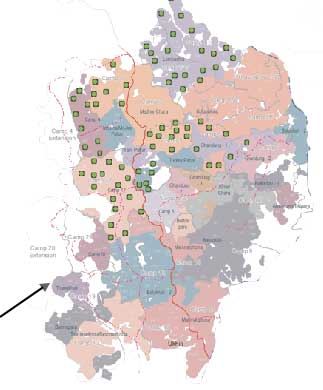 Safe Spaces and Education for Children

Children on the Edge was one of the first organizations to gain permission from the authorities to open Learning Centers. There is a labyrinth of approvals needed (from a myriad of different bureaus and officials) to simply open the doors of a classroom. Permission was granted in April, and they moved rapidly to build 75 new Learning Centers.

Each Center has a bright and colorful environment with flowers and shrubs planted outside. Over 60% of the 150 teachers are from within the Rohingya community, providing familiarity for the children. They have focused on creating a safe, welcoming space, with consistent care and kindness.

Children on the Edge, in partnership with local NGO Mukti, is using a high-quality curriculum, approved by the Bangladesh Government, covering literacy, writing, math and science. Children will take standard exams to prepare them for entry into the mainstream system, should government policy allow this in the future.

The curriculum has been augmented to include elements of creativity, child rights and basic health. In the last few months the children have had lessons on washing hands, using the toilet and brushing teeth. Posters in different languages illustrate health and hygiene tips and teacher Minura says “The children are cleaner and healthier now that they come to the Center. We take time to wash our faces, hands and feet and we talk a lot about the importance of good hygiene”.

“When we first arrived, my parents did not let me leave the house, so I was very bored just sitting with my Grandpa all day. Now there is a school I can go every morning and I am very happy to be here”. —Shofika, aged 11

Many of the teachers are widows, having lost their husbands in the violence last year.

Nurthza who arrived seven months ago says,“I have two children and no husband now, so this job allows us to live. If I did not have this job, I don’t know what we would do, I really don’t know. In nine months, my life has changed so much. I have left everything behind. We all have. To be here and to help children is a great success after we have lost everything”.

The next stage is to further develop all 75 Learning Centers, with the formation of School Management Committees (SMCs) and Child Councils. In the coming months Children on the Edge and Mukti will install full water filtration, solar powered fans, and ensure availability of segregated latrines. Teachers will also receive training to identify health concerns and how to be sensitive to children with trauma.