10 Ways Women’s Savings Groups Have Paid Off in Myanmar

10 Ways Women’s Savings Groups Have Paid Off in Myanmar

Ten years ago, Myanmar-based civil society organization Women for the World (WfW) established its first women’s savings group with only a handful of participants. Today, WfW’s founder and director Van Lisa “can’t even count how many there are.” The life-changing groups have taken off in the informal settlements on the outskirts of Yangon and in villages in underdeveloped and conflict-torn Rakhine State.

To commemorate this decade of savings, Van Lisa describes 10 ways she has seen this initiative empower women and change their lives for the better.

1. Meeting basic needs
People in Myanmar like to live together as communities rather than as individuals. People who are surviving as individuals are very vulnerable, so it is very important to build a community to meet their basic needs. 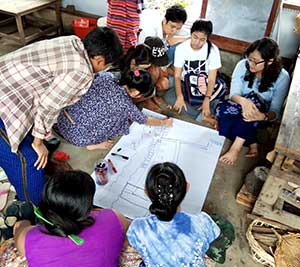 2. Building a grassroots network
Many women’s groups have started to link to one other. They engage with other organizations and policymakers as a group or as a network.

3. Mobilizing communities
After women organized themselves through savings groups, they were able tackle other issues together—like land and water issues.

5. Reducing domestic violence
Once women live collectively and support each other, these women are less prone to being abused by their husbands. Also, collective housing creates a more secure place for women and their children.

6. Building independent research skills
In Yangon, there are a lot of people living in informal settlements… they can be evicted easily or have their communities demolished. Women did a survey of who lived where and collected data as a savings group. They used surveys and mapping as tools to organize the people. They started looking for land where they could resettle.

7. Accessing other funding sources
In the informal settlements, women’s savings groups calculated the price of new land, and how many people were in their communities. Their savings were not enough to buy the land or the housing materials, so they started thinking about borrowing the money through microfinance. The communities organized themselves and discussed the duration, the amount, and the interest rate of a microfinance loan. They got the loans individually but managed them collectively—they used the money to buy the land collectively and build homes.

8. Advocating for themselves to those in power
The Yangon regional government has agreed to give land for collective ownership in six townships. This is a key success.

9. Practicing democracy in action
We integrate democratic practices into training for savings groups. All of the members of the savings groups are decision-makers, but they have to make decisions through a consensus. They have to discuss a lot and hold meetings. Because of that, they have to build the skill of dialogue.

10. Realizing human rights
The groups strive for, and help make real, some very basic tenets: All communities should have land, housing, and clean water. They should have ID cards. They deserve their rights. No one should be excluded.

Since that initial handful of pioneering members, thousands of women have participated in WfW’s savings groups in Yangon, Karen State, and Rakhine State, with new groups continuing to emerge in Shan State and Mandalay Region. Much harder to count is the ripple effect this enterprise has had on their lives. Greater stability. Freedom from loan sharks. Land. Secure housing. Clean water. Better health. More confidence. Stronger voices. It adds up to a vastly more promising future for themselves and their entire families.