Youth Forging the Path to Justice

Youth Forging the Path to Justice 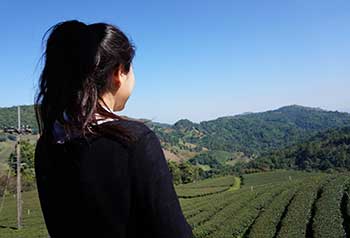 SSSNY teacher and alumnus Noon is pictured in the mountains on the Thai-Burma border.

I’ve been teaching English and Environment at the School for Shan State Nationalities Youth (SSSNY) for almost five years, since 2015. I have probably taught more than 200 students! I was originally a student myself in the 8th Social Justice Education Program (SJEP) here. That was in 2008 when I was about 18. Now I have graduated with a BA from a university in Thailand, and I’m helping the next generation of youth.

Before I came to SSSNY, I didn’t know a lot about human rights abuses in Shan State, even though I lived through them. I stayed in an orphanage for 10 years and attended non-formal school before I came here to study. After I attended SSSNY, I realized that I was one of the victims of the forced relocation campaign carried out by the Burmese military in southern Shan State in around 1996. I was so young then. My family was never able to return to our village.

When I was younger I didn’t want to be involved in any political issues because I thought they were too complicated. But at SSSNY, we studied history, the environment, systems of government, human rights and many other subjects, too.

It became clear to me that even if you ignore political issues, you are still automatically affected when you and your family are from Shan State. I wanted to make youth aware of the situation in our state. In Shan State, people don’t know when they will have to flee from the military or where they will go, but they have to be ready to run away from the fighting, even now. I know what they have to face, because I had to face it before, too.

Since I was a child, I had wanted to be a teacher because I didn’t have a chance to attend school. I promised myself that one day I would teach other people who also didn’t have this chance to attend. After I graduated from SSSNY, I decided to pursue my dream of teaching so that I could help make change in our community. Now I’ve reached my dream. I’ve also learned that to most effectively make change, we should start from the local level, from the grassroots. Rural ethnic communities are the most vulnerable to military abuse, and they continue to be affected by civil war and by a lack of access to education and protection of their rights.

I don’t feel that I am trying to make change alone. There are so many young community workers from Shan State in our SSSNY network. I know I will have been successful as a teacher if my students can learn and do more and do better than I can. They apply the knowledge they get at the school and become teachers, community organizers, radio announcers, members of political parties, land and environmental activists.

SSSNY is different from other schools in Shan State. It focuses on empowering community workers and activists from all different ethnic backgrounds and it is promoting activism for structural change. I hope our students will go back and change what needs to be changed, as much as they can, as much as is possible, and work for justice.

As told to Partners Asia by Noon.