Imagine a woman farmer using her smartphone to learn to build a simple solar dehydrator so she can dry strawberries and mangos and sell them off-season instead of letting her excess crops rot.

Imagine a woman migrant worker using her smartphone to digitally remit money back to family in her village instead of carrying cash on her body, making her a target for robbery and assault.

Imagine a woman vegetable peddler quietly saving a few kyat every day in her digital wallet instead of forfeiting her hard-earned cash to male relatives who want to imbibe. 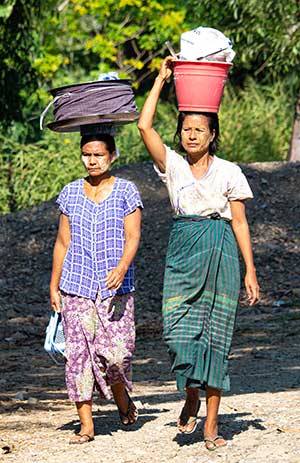 In Myanmar, as in the rest of the world, women balance heavy workloads while caring for children, home and the elderly, but they are not compensated as well as men, in part because they work in the informal economy in undervalued jobs vulnerable to exploitation. Mobilizing Myanmar aims to bring women into the formal economy through digital finance, opening opportunities for entrepreneurship and better paid, stable work.

These are just a few of the ways women’s lives will change for the better thanks to Mobilizing Myanmar, a Partners Asia initiative that’s empowering women to lift themselves out of poverty using the smartphones already in their hands. Led by Pwint Htun, an engineer and U.S. telecom executive who served on Partners Asia’s Board of Directors from 2012 to spring 2019, Mobilizing Myanmar is leveraging Myanmar’s Smartphone Revolution and local women’s networks to bridge the gender gap and create a gateway to the formal economy for women who have long been excluded.

Though Myanmar is the poorest country in Southeast Asia with the least developed financial system, it has leapfrogged most nations around the globe in mobile phone and internet usage. Maturation of the smartphone market in Myanmar took only four years, whereas other places have taken a decade or more.  Most people in Myanmar have jumped straight to smartphones. ​

There is no other place in the world, and no other time in history, where so many poor women have had so much access to information and networks. In Myanmar, technology + women networks are what makes this rare opportunity so exciting.

Myanmar’s Smartphone Revolution happened so fast, most mobile phone users have not learned how to use their phones safely or wisely. As digital finance rolls out in Myanmar, the digitally uneducated are vulnerable to being both exploited by the digital economy and excluded from it. Most women don’t know their own passwords or how to recognize and avoid scams. Very few understand how to search the Internet. Fewer than 16% know how to download an app.

And though the women of Myanmar toil in fields and fish markets, and labor in construction, factories, brothels and domestic servitude, they are largely excluded from the formal economy. Few women have bank accounts and only 0.01 percent of women can access credit with a formal financial institution.

Myanmar’s double gender gap—digital and financial—presents a tremendous opportunity in this primary smartphone market:  Women can learn how to use the powerful tool in their hands to change their financial lives.

On the surface, mobile money is about technology and apps. But at its core, in a nation where 38 percent of the population lives below the global poverty threshold of $1.90/day, it’s about transformation of society as women escape poverty, earn and save money, and gain power. It’s about changing social norms.

To find out more, visit mobilizingmyanmar.org